The Trilogy process has been rigorously researched and tested. 334 total participants in 11 separate groups were tested over the course of two years, and the results were OFF THE CHARTS! 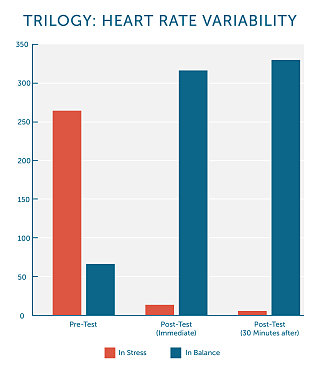 HRV is a measure of the time between heartbeats. A high HRV represents lots of variability, meaning the times vary greatly, while a low HRV represents very consistent intervals. Learn more about the HRV testing we’ve done in the past here. Below are the results on HRV when participants used the Trilogy process.

Note: Approximately 10% of those beginning as in stress performed one or more of the Trilogy Intensive Add-On Minutes. 32 participants beginning in stress did 2 Trilogies. Six participants did 3. 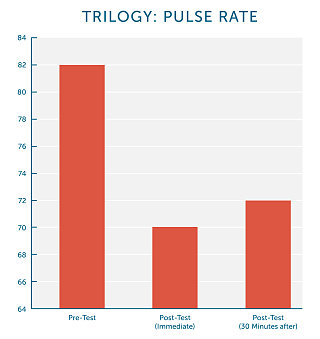 Pulse rate is an indicator of stress. Trilogy proved to decrease the pulse rate in participants by an average of 12%. 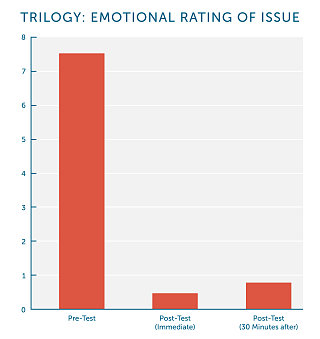 Prior to beginning the test, participants were asked to rate the problem they were addressing with Trilogy on a scale of 1-10. The reduction was dramatic!

Prior to the test, participants rated their issues as an average of 7.6. By the end of the test, this was down over 90%. Only 9 participants rated their issue as being greater than 1—of them, 7 said emotional charge was gone but still found the issue bothered them intellectually. The remaining 2 said the issue no longer bothered them non-physically but did bother them physically. All acknowledged a significant decrease.

Trilogy is a powerful, life-changing process, and the research above proves it! Begin using it today for FREE!

Get My Free Training